Arnold Schwarzenegger is back in the acting saddle. He hasn’t headlined a movie since 2003’s Terminator: Rise of the Machines, but now that he’s finished his stint as the Governator, he’s returning to his roots. 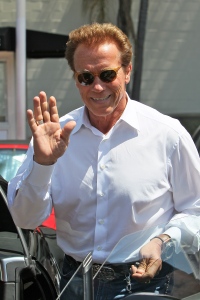 When you think of the career of Arnold Schwarzenegger, what genres come to mind? Action? Science-fiction? Fantasy? What about Western? Out of all the projects he’s been attached to, Schwarzenegger’s never come across as the cowboys and Indians type but that’s about to change.

The actor is set to star in the Western-thriller Last Stand, which is the English-language debut of director Kim Jee-Woon. Lionsgate is producing the film and with the addition of Schwarzenegger, production is good to go.

Last Stand will center on “a broken-down man who needs to make a moral decision about whether he should stand up for his town or not.” The role was originally meant for Liam Neeson (we could definitely see that) but he dropped out due to scheduling conflicts.

Do you think Arnold Schwarzenegger still has box office pull? He’s really testing the waters and we’re interested to see how this plays out.