Demi Lovato says she is on the path to recovery — and her new single Skyscraper is like therapy to her. 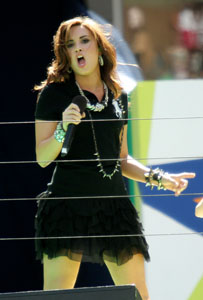 Life is completely different today than a year ago for Demi Lovato: After a very public nervous breakdown, the Disney star went to rehab and has admitted to struggling with bulimia, anorexia, self-mutilation and bipolar disorder.

Now Lovato says her new single Skyscraper has helped her through her journey, like another form of therapy. The singer talked about her song and struggles with Ryan Seacrest.

“I wasn’t going to continue to be alive if I continued to treat my body the way I was,” Lovato admitted. “It’s a daily journey and it’s definitely going to be a struggle that I’ll have to deal with for the rest of my life. Sometimes I think, ‘Why couldn’t I have been normal?'”

Lovato told Seacrest she first recorded Skyscraper a year ago, when she was in the throes of her illness — and you can hear her fragility in her voice. They re-recorded the track after she got out of treatment, but decided to stick with the original vocals.

“It just didn’t feel the same, so we kept the original one,” Lovato said. “For me it was… so symbolic, it being the song I recorded before treatment and yet it was providing a message. It’s so crazy the way things played out, that it ended up being my symbol and it represented what I’m trying to spread the word about — getting help and rising above any issues that [I and] my fans are dealing with.”

“There were so many things that represented my addictions and eating disorders and self-harm,” she explained. “When I’m unraveling this black fabric… It was the toxicity [that] took over my mind for so long, that oozed out of every pore that I had because I was suffering inside… I’m taking it off and walking on broken glass and powering through it.”

“That video was an emotional release for me, like therapy… I kept crying, I was so emotionally invested… That’s when I realized, that’s what music videos are all about.”

Thankfully the talented teen is well on the road to recovery.

“I’m not going to be perfect, but… if I can make it through the day, that’s all that matters,” Lovato said.