Oprah Winfrey is taking over her OWN network — the media icon is sliding into the CEO spot. 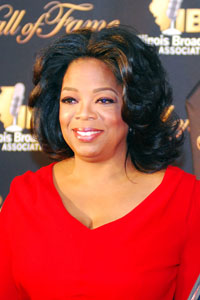 Oprah Winfrey is hoping to bolster her struggling OWN network by becoming the new CEO.

Harpo co-presidents Sheri Salata and Erik Logan will take on the same roles at OWN beside Oprah.

Oprah, a newly-minted honorary PhD, announced the news on Facebook this morning, writing:

“So as of today… Harpo Team and OWN team become ONE.

It’s an incredible challenge ahead trying to figure out what kind of shows and programming will resonate with you, inspire you, bring a little piece of light into your already crowded existence. But I feel called to do it, and will be relying on your feedback, emails and tweets and message boards to let me know what you think.”

Oprah also announced that Rosie O’Donnell’s talk show on OWN will debut on October 10 — and will be filmed in Oprah’s old stomping grounds at Harpo studios in Chicago.