Olivia Wilde’s divorce may not yet be final, but she’s already dating, and she says she’s terrible at it. 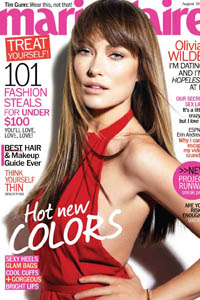 You wouldn’t think from all the rumors about her dating life that House star Olivia Wilde would have any problem being single now that she’s separated from her husband of eight years, but that’s exactly what she says is happening.

“I’m trying to be adult, entering the shark pool of dating, but I’m hopeless at it,” she says in the latest issue of Marie Claire, of which she graces the cover. “I think of myself as being very cool and independent and not jealous, but I like clarity. I ask a lot of questions. A guy recently said to me, ‘Maybe it’s because you were raised by journalists, but you really want facts!'”

On House, the 27-year-old actress plays a bisexual doctor, but in real life she filed for divorce this spring from husband Tao Ruspoli, an Italian prince, whom she eloped with at only 18.

“The trauma of the whole thing has been humbling, and for the first time, I’m a little bit wobbly,” she says of their divorce. “I’m a case of arrested development, in a way — from spending your 20s with someone who really loves to take care of you, as my husband did. But I think it’s very healthy to spend time alone. You need to know how to be alone and not be defined by another person.”

Linked with Justin Timberlake and Bradley Cooper, Wilde says being a celebrity doesn’t make dating any easier. “It makes dating harder,” she says. “You go on one date and everyone thinks you’re dating. It sort of puts pressure on this little sprout, and tramples it. If someone becomes involved with you, they know they will be photographed and written about and investigated in some way.”