After six years together, Angelina Jolie and Brad Pitt have decided to get married! Get all the details on their intimate summer wedding here. 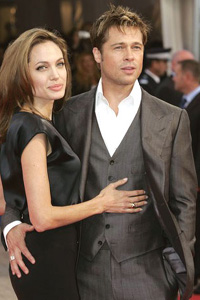 They have six children together, tattoos symbolizing their unity and now hot Hollywood couple Angelina Jolie and Brad Pitt are planning on making it official by getting married.

Us Magazine is reporting that multiple sources have confirmed Pitt and Jolie plan on getting married within the next few months and are planning an “intimate and informal” wedding. They could exchange rings at their 16th century chapel at their renovated Chateau Miraval in Correns, France.

Who will be invited? Brad and Angelina will more than likely be surrounded by their six children, Maddox, 9, Pax, 7, Zahara, 6, Shiloh, 5, and 3-year-old twins Vivienne and Knox, as well as close friends and family.

Why did the couple decide to get married? It seems like their kids actually were the deciding factor. They had said in the past that they would get married once same sex marriages are legal and had not really felt like they needed to get married.

Jolie told Vanity Fair last year that they are not “against getting married” but “it’s just like we already are. Children are clearly a commitment, a bigger commitment [than marriage]. It’s for life.”

But now, Pitt recently told USA Today that “the kids ask about marriage. It’s meaning more and more to them.”

We can’t wait to hear more details on their wedding including Angelina’s wedding dress! Stay tuned as more details emerge.