Is Charlie Sheen dead? Rumors of the actor’s demise are sweeping the Internet today. 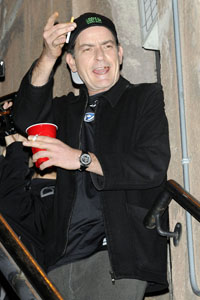 Is Charlie Sheen dead? Say it ain’t so! Could our favorite warlock finally have succumbed to the darkest side of his addictions?

The answer is a resounding no. Charlie Sheen is not dead, but your computer could be if you click the links that contain the so-called news.

The scam started on Facebook, says Mashable, where if a viewer clicked on the link — usually saying something like “RIP!” or “Breaking News” and that Sheen died of cardiac arrest or, more vaguely, in his home — she would be taken to a YouTube clone page. Clicking on a video at best causes a survey to pop up to gather your personal information; at worst it can install malware on your computer.

If you’ve fallen victim to the Charlie Sheen death hoax, go into your Facebook privacy settings and remove permissions for any app you don’t recognize, then delete any spammy posts from your profile page. Then run your anti-virus software.

Sheen himself addressed the rumor on Twitter this morning while addressing the tragic death of an Indiana police officer.

He’s been tweeting all morning, so unless he was resurrected by tiger blood, Charlie Sheen is not dead.