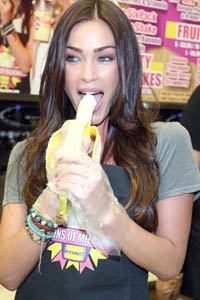 Jasmine Waltz hooked up with David Arquette when he split from Courteney Cox, and after their affair went public, Waltz decided to try and sell her own celebrity sex tape.

Last year, Arquette ended up hooking up briefly with Waltz, who is something of a celebrity groupie. Now, a sex tape featuring Waltz is about to hit the Internet. Waltz claims the sex video is being released by an ex-boyfriend and without her permission, but apparently that’s not the whole story.

Waltz says the video was made for a former boyfriend as a Valentine’s Day gift. “I’m absolutely shocked that the public is now going to see what I made with my boyfriend on Valentine’s Day,” she claims, adding, “I’m not even famous which blows my mind even more, I’m just a girl in Hollywood.”

For whatever reason, the deal fell through, and the Valentine sex video will be sold online instead.

Previously, Waltz scored headlines for getting into a fight with Lindsay Lohan. Purportedly, the two were fighting over Waltz’s ex, Doug Reinhardt, who’s also been linked to Paris Hilton. Waltz, a cocktail waitress at the nightclub, reportedly punched Lohan in the face.