In Harry Potter and the Deathly Hallows Part 2, Rupert Grint finally gets the girl. That girl is Hermione (Emma Watson) and for fans of the iconic literary series, that moment could not come soon enough. The only problem is that the ultimate moment for Ron Weasley and Hermione Granger comes in what will serve as the last audiences will ever see of the world of Harry Potter.

Rupert Grint was rather candid about the closing chapter that is Harry Potter and the Deathly Hallows Part 2 when we caught up with him. Grint is engrossed on what the rest of the world is currently feeling as Deathly Hallows premieres and a part of our pop cultural collective lives… and ends. 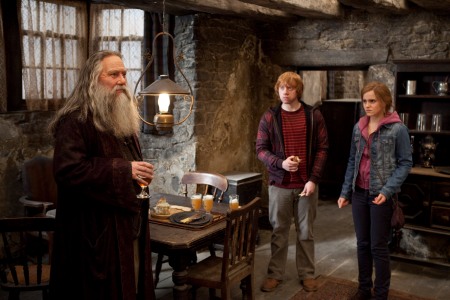 For the kid who bought an ice cream truck with his Harry Potter earnings, it was fitting that he drove it on the set for the final day of filming, stocked ?with frozen treats. Rupert Grint’s portrayal of Ron is nothing less than perfect. He provides a power that is both sweet innocence coupled with an unwavering belief in his roommate, best friend and Dumbledore Army leader Harry Potter?. 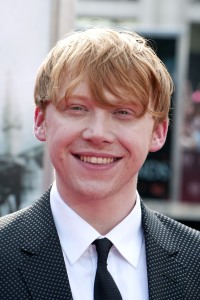 SheKnows: Was the kissing Hermione (Emma Watson) scene as epic as it is for fans?

Rupert Grint: It was a tricky one to do. Obviously I’ve known Emma so long, she’s like my sister. We were mutually both dreading the scene. We just wanted to make it believable. With the romance of it, because it’s been built up for so many years, we wanted people to think that we actually wanted to kiss each other. In reality we didn’t!

SheKnows: Did they make you do it over and over? Or was it just a couple of takes?

Rupert Grint: We did about four takes. I find it hard to recall anything about that day. It’s been erased from my mind!

SheKnows: What was your favorite scene in the entire series?

Rupert Grint: There are so many really, I find it hard to pick out one, but I think the chess scene in the first one was quite good. It was a huge set and things were being blown up. It was just the coolest place to be.

SheKnows: Having grown up portraying Ron, how like him are you?

Rupert Grint: After 10 years playing the same guy every day, I think you do naturally morph into him. We have become Ronpert which I think will stay with me for a while. I have always felt this close connection to Ron throughout all the films. There will always be a bit of Ron in me for the rest of my life.

SheKnows: How did personal time with J.K. Rowling aid your effort to capture Ron Weasley over eight films? 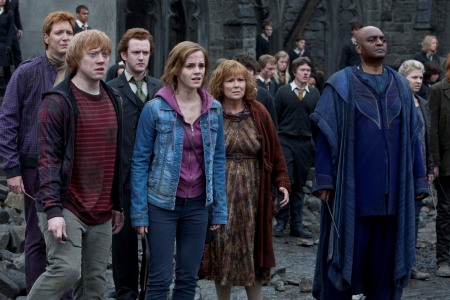 Rupert Grint: Whenever J.K. Rowling came to the set and we would chat, we rarely ever spoke about the story, we just kind of chatted generally. She filled us in with the epilogue, where the characters go and what they do for a living, she had written kind of the rest of their lives really, so that was quite interesting to hear what we all became. I worked in the ministry doing something and I forgot what Emma’s character was doing.

SheKnows: How did you deal with the immense spotlight these films have brought you?

Rupert Grint: The attention is quite strange and never being invisible completely. It took me a while to adjust to it, because I was always quite a shy kid. It’s something you actually take for granted. I remember the first time I was recognized was at a shopping center where I live which was near a school and the first film had just come out. It was really weird but I enjoyed it. It was quite cool actually, as it’s something I’ve never really hid from. It’s just become a part of my life now.

SheKnows: What prompted you to buy an ice cream truck?

Rupert Grint: The ice cream truck was something I’ve always wanted. That’s what I wanted to be was to be an ice cream man. So as soon as I passed my driving test, I got an ice cream van.

SheKnows: Are you a role model for redheads?

Rupert Grint: I’ve always been quite a proud ginger. Having ginger hair is not the coolest thing really. It’s nice that Ron is quite a respected ginger and Prince Harry as well. Yeah, I get a lot of support from the ginger community.

SheKnows: How does filming Deathly Hallows Part 2 compare to the other seven films?

Rupert Grint: This was the most depressing one actually I have ever done. It was deathly. I think it helps you get into the mood when you’re on the set and hearing Maggie Smith sobbing, it brought the mood down.

SheKnows: How did you like seeing yourself as an older man? 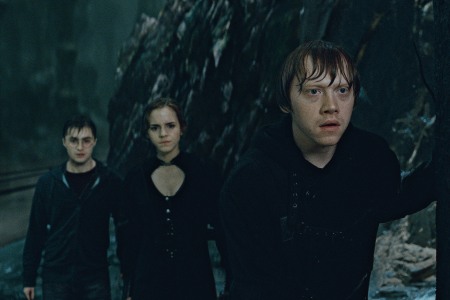 Rupert Grint: The first attempt for my character in particular was quite terrifying. I looked like a monster really — a bit like a Donald Trump — I had no hair and I was obese [laughs]. I think it was a bit too much. Then they found the balance finally. It was a very strange thing to film really, just sitting in the makeup chair and watching them gradually age me. It was quite terrifying.

SheKnows: With the second version that you shot, do you feel like you’ve seen yourself 20 years from now?

Rupert Grint: It would be interesting to compare it in 19 years to see how accurate it is. I hope not [laughs]!

SheKnows: How do you feel about the ending of the Harry Potter movies?

Rupert Grint: It’s been a very weird time really of accepting the end. We finished filming a year ago and I now have this quite empty feeling. It’s taken me quite a while to accept. We had the London premiere two days ago and I got really emotional! I’m not usually that emotional. This experience has really been my childhood. I’m sure I’ll get used to it.

SheKnows: Did one particular scene while filming the final film get you?

Rupert Grint: Where it’s the three of us after the battle and we are walking on the bridge and the castle is destroyed behind us — it felt kind of parallel with our own lives really. It has been quite emotional and seeing the film as well, I did get quite choked up at the end. It’s quite sad because I’m going to really miss it.

Check out our interview with Rupert’s co-star, Emma Watson!>>