Did Megan Fox Photoshop the photos she says prove she doesn’t use Botox? 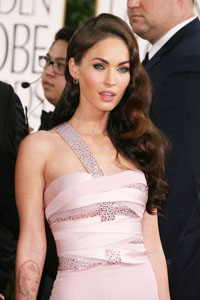 Last week, Megan Fox posted photos on Twitter she says prove she doesn’t use Botox. Now not just one, but multiple doctors are coming forward to say the actress must have Photoshopped those pictures — because faces simply don’t move the way hers appears to in the images.

The OC Register asked several cosmetic surgeons for their take on the pictures — and the general consensus is that Fox is full of it.

“The wrinkles that start horizontally in the middle of her forehead and curve down towards her eyebrows don’t exist in anyone,” New York plastic surgeon Dr. Nicholas Vendemia said. “The muscles in the forehead and brow simply don’t create curved wrinkles like that. The wrinkles Megan is showing us don’t coincide with brow anatomy, nor do they match the facial expression she is making.”

Dermatologist Dr. Vince Afsahi said, “The photo looks altered. The muscles in the forehead do not usually create an arc-like pattern seen in the photo… Anatomically [it] does not make sense.”

“This photo is totally consistent with the wrinkle pattern you will see in someone whose Botox has begun wearing off,” plastic surgeon Dr. Terry Dubrow added. “When you have Botox to the entire face, different parts wear off at different rates and can give you a strangish-looking pattern of wrinkles until it all wears off. I bet this photo was taken the day before her Botox appointment.”

“She’s a beautiful girl and should ease up on the Botox and obvious filler she has in her lips,” Dubrow said. “She’s starting to look a bit alien and should consider parking her spaceship for a while.”

Megan Fox will have to try harder to convince us she’s an all-natural beauty.