Sarah Jessica Parker considered leaving the city that made her a star, she told Vogue. 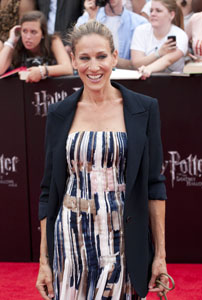 Sarah Jessica Parker and the city of New York are inseparable in the minds of her fans: Not only was the city the fifth friend in her wildly successful show Sex and the City, but Sarah got her start there on Broadway as Annie when she was just a kid.

Related story Sarah Jessica Parker’s Secret to Plump Under Eyes Is This Amazon Favorite That Has Nearly 10,000 Perfect Ratings

So it’s crazy to think she and husband Matthew Broderick — a huge Broadway star in his own right — would ever entertain the thought of leaving the Big Apple, right?

Parker says they actually flirted with the idea, if only to get their kids away from the prying eyes of the paparazzi. In the August issue of Vogue, Parker says, “I can’t imagine living in seclusion. We flirted with it. We went outside the city and troubled all these realtors and stood in these homes and fantasized, and then I kept picturing nine o’clock at night and…”

“The beautiful thing about New York is, you have to expose yourself to other people the minute you step outside the door,” Parker said. “There is no choice. And I love that.”

Parker and Broderick have three kids, son James Wilke, age eight, and two-year-old twins Tabitha and Loretta. Both parents can be seen out and about well after nine o’clock at night frequently.