Hugh Hefner and Crystal Harris made headlines with their engagement and wedding plans, but it was the last minute breakup that kept everyone talking. Lifetime gets the story straight from the king of the Playboy manse and the ex who dumped him in Hef’s Runaway Bride, airing next Tuesday. 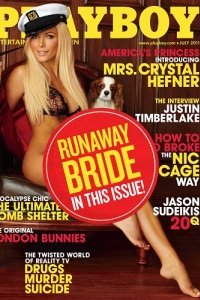 With her “Introducing Mrs. Crystal Hefner” Playboy issue ready to hit stands and the wedding details all in order, Crystal Harris set off a whirlwind of speculation by canceling her wedding to Hugh Hefner on June 14, 2011, just five days before the nuptials.

Now, Lifetime is telling the story of the breakup with behind-the-scenes footage and exclusive “heartbreaking” interviews with Hefner and Harris. The one-hour special tracks the making of the breakup, from the trip where Harris first “discovers a newfound passion for the music industry,” through the stress of pulling together the wedding and ultimately, to Harris’ decision to leave Hef.

Cameras also caught Hefner’s response to being dumped and the wellspring of support that poured in with visitors like Holly Madison, Kendra Wilkinson, Hefner’s sons Marston and Cooper, and Harris’ best friend and maid of honor, Anna Berglund.

It’s no surprise to learn the cameras were rolling as Hefner and Harris prepared to say “I do.” The footage was likely envisioned for a behind-the-scenes wedding special, but one has to wonder when the cameramen, at the very least, realized Hefner and Harris wouldn’t make it that far.

It’s also hard not to wonder if Hef and Harris ever intended to make it that far. The world’s most famous bachelor is always looking to make news, while Playboy bunny Harris definitely has her eye on a music career. Harris actually signed a recording contract back in April 2010 and her debut single Club Queen was released on the very day she dumped Hef.

Hef’s Runaway Bride will air on Lifetime on Tuesday, July 19, at 10:00 p.m. ET/PT. Perhaps it will clear up all of the controversy, or at least some of it.