Brooke Mueller doesn’t look too concerned about her sobriety in some recent photographs. 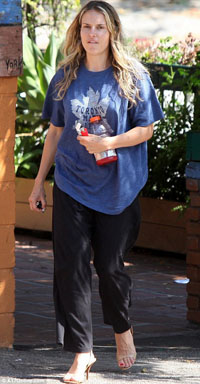 Brooke Mueller might try to claim she’s on the straight-and-narrow since her last stint in rehab, though a photo taken by a photographer might show otherwise.

Cameras caught Mueller in Hawaii wearing baggy sweats, a t-shirt, beige pumps and what appeared to be a homemade foil crack pipe. She took off running when she spotted the photogs on her tail.

She’s in the island state with her two children — Bob and Max — with ex-warlock Charlie Sheen.

Mueller was also spotted in Maui earlier this week clutching a wad of cash and conversing with shady-looking people in cars. Does this mean she’s back on the drugs? It certainly appears so.

Oh, and it gets better: Mueller and Sheen have agreed not to order random drug tests for each other as a part of their joint-custody agreement. She has primary physical custody of the twins.

“Brooke is just taking it a day at a time. She has been down this road before and she knows what she has to do. Brooke needs to continue to play an active role in her sobriety,” a friend said recently.

Yeah, we’re not buying it. Let’s just hope Child Protective Services gets involved — or, can we please let Denise Richards adopt the boys?

Do you think Brooke Mueller is back on drugs?

Read on for more Brooke Mueller