Funny girl Emma Stone takes a break from the gaffs and spit-takes to go seriously retro as Skeeter in this summer’s drama about women and race relations, The Help. SheKnows caught up with Stone on set to talk about going back to the ’60s and going up against Bryce Dallas Howard’s horrible Hilly in the big screen adaptation of Kathryn Stockett’s bestseller.

Emma Stone is known for stealing laughs in films like Easy A, Zombieland and Friends with Benefits. In The Help, due in theaters August 10, 2011, however, Stone takes a dramatic turn, lending her awkward charm to Skeeter, a 1960s college grad who finds herself in the middle of the race debate and at war with her best friend Hilly after she embarks on a secret writing project with the African American maids in Jackson, Mississippi. 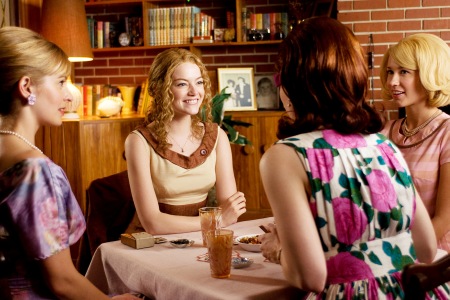 Stockett’s bestselling novel captured the complex and heartbreaking relationship between white families and “the help” who cleaned their houses and raised their kids, and now, childhood pal Tate Taylor has adapted the tale for the big screen.

SheKnows caught a quick minute with Emma Stone, who was in the middle of shooting Skeeter’s above pictured welcome home scene. Stone dished her upcoming drama and life on set with Bryce Dallas Howard, Viola Davis, Octavia Spencer, Allison Janney and Sissy Spacek.

Emma Stone takes on The South

SheKnows: Not being a Southerner, what has it been like to jump into this world, both on screen and off?

Emma Stone: We’re so lucky that we’re in Mississippi. Being surrounded by Southerners and hearing their stories and watching things about Civil Rights history, like Eyes on the Prize, or reading books about Jim Crow helps me with the backstory, in terms of the time period. I never knew what the feeling of being in the South was like, [with] the secrecy and the two sides there are to everybody. We’re in a small town, and everyone’s been so nice and so welcoming, but they also know everything that’s going on. They know if I had someone over to my house last night. It informs what we’re talking about in the movie [and] the secrecy required for something this illegal, at the time. I now understand how quickly word travels in a small town in the South. It’s good to know what it’s like.

SheKnows: We heard that you nailed this role in your very first reading. What was your secret?

Emma Stone: I didn’t know that they felt that way, but it’s very nice to hear. Skeeter and I have a lot more in common than I would probably care to admit. Of course I’m not as brave as she is in the endeavors she’s taking on, but I do understand being a little different than your peers. Everyone’s gone through that. I liked so much about her — that she wasn’t a martyr, and the lessons she learns and the way she learns it. I love this girl, so I’m trying to do the best I can to accurately bring her to life.

SheKnows: How easy is it to get that love-hate relationship between you and Bryce’s character, Hilly?

Emma Stone: Bryce has been pretty note-perfect so far. It’s important to Tate to establish that Hilly and Skeeter were best friends and still love each other underneath it all, but they haven’t spent a lot of time together the last four years. [After] those four very formative college years, their opinions on things greatly differ, and it becomes more apparent now that Hilly is married and has kids. It’s easy for me, just because of the way that Bryce is playing it. It’s been fantastic. She can switch from sweet as pie to just awful in a heartbeat, and she’s figured out the balance. It’s kind of my job to react to whatever mood Hilly’s in.

SheKnows: What’s it like working in a cast that’s mostly female?

Emma Stone: We’ve been pretty lucky on this one. Everyone is here to make the same movie, and no one’s really come with an ego on them. When that’s the case and it’s women, it’s actually pretty– I don’t want to sound all “girl power” here, but it’s been a nice, empowering environment to be in. Tate is just keeping a calendar of when [and] who is going through any hormonal times, so he’s aware, because he’s surrounded by nine emotional actressy females. 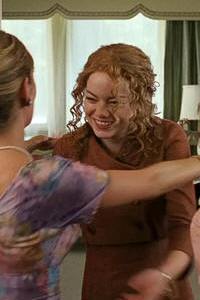 SheKnows: I’m sure there’s a good character reason for this, but you’re wearing twice as much clothing as everybody else. What’s that about? [Stone was wearing this when we spoke and then stripped down to the outfit at right!]

Emma Stone: I take the jacket off in the next part of the scene. I just came from my job interview at the Jackson Journal, so I think she’s trying to cover up a little bit more, but you know, Skeeter is a pretty modest girl.

SheKnows: What’s it been like working in this hot, steamy climate?

Emma Stone: I’ve got a wig on, so that’s been interesting, and the girdle. It’s hot. But I’m from Arizona, in the desert, which makes you feel like you’re being cooked to death. Here, I feel alive at least. There’s moisture, and “Oh, I’m a human being, breathing air.” But the mosquitoes are god-awful.