Sherwood Schwartz, the creator of mega-hits The Brady Bunch and Gilligan’s Island, died of natural causes at the age of 94.

Sherwood Schwartz died this morning at 4 a.m. at Cedars-Sinai Medical Center surrounded by family, including his wife and children. The 94-year-old created some of the most beloved TV shows, including The Brady Bunch and Gilligan’s Island. He had been hospitalized and underwent surgeries for an intestinal infection shortly before his death. 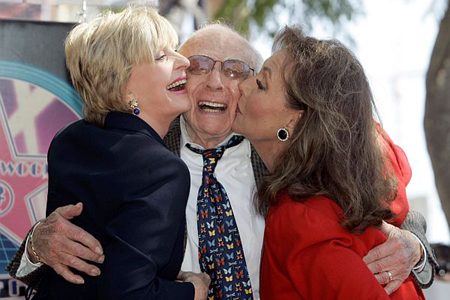 “I learned so much from him. I produced all around. I’ve worked as a network executive, and no one came close to being as good as he was in every single way. And I’m not the only one saying that. If you ask any other producers who was best, they’ll say Sherwood Schwartz,” says his son and business partner Lloyd Schwartz.

Sherwood started out as a writer for Bob Hope’s show and created The Brady Bunch because he wanted to create “feel-good television.”

“Believe it or not, he viewed Gilligan’s Island and The Brady Bunch as the same show. They were about people trying to learn to get along,” his son says. “He felt like the lasting influence was that people felt better watching them.”

He and his son were actually working on a Gilligan’s Island movie for Warner Bros., before his death.

“We’ve been getting the script in and we’re turning it over soon. That will be another legacy of his,” Lloyd says. “He’s just going to go on. Some of my job is to make sure things are as he’d like them to be — and they will be.”

Florence Henderson, who played Carol Brady on The Brady Brunch, tweeted her condolences, saying: “Sherwood had a wonderful family who loved and respected him. I know his BB family felt the same way. He will be greatly missed.”