Twilight actor Peter Facinelli and Jennie Garth are living apart, say sources. Is their marriage on the rocks? 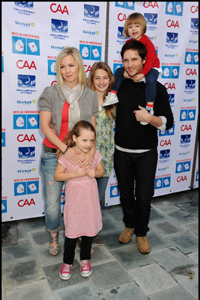 Peter Facinelli and Jennie Garth are one of the cutest Hollywood couples around, however, reports are surfacing that their relationship may be on the rocks.

The pair, who have been married since 2001 and have three daughters together, are on a “break” and living apart, reports Perez Hilton.

“Jennie is living in the family home in Toluca Lake and Peter has been renting a home in Santa Ynez,” the insider says. “It’s not looking good!”

The source goes on to say that “no third party is involved, but divorce is looking like the final outcome.”

Our inside source contradicts these reports and tells SheKnows that they “would be shocked if something was wrong,” and that the couple has actually rented out their Toluca Lake home to a “third party,” indicating that Jennie is not living there.

Facinelli, who plays Edward’s vampire dad in the Twilight saga, tweeted last month: “Playing the role of ‘Dad’ for the summer. Just touched down in Barcelona. Taking my kids on a cruise.”

“Back in California today. Sad #EuroCruise is over,” he tweeted on July 3rd.

Let’s hope that the family that travels together stays together!