The Help doesn’t hit theaters until Wednesday, August 10, but Bryce Dallas Howard is already getting raves for her portrayal of the ever proper but vile Hilly in the big screen adaptation of Kathryn Stockett’s novel. SheKnows sweated it out on Elizabeth Leefolt’s patio with Bryce Dallas Howard, who came out between takes to talk Hilly, the South and racism in the 1960s.

SheKnows flew to Greenwood, Mississippi last summer to visit The Help set. In the sweltering 100-plus degree heat, we watched the action go down at Elizabeth Leefolt’s house, hid out in an air conditioned tent listening to the cicadas scream and we were served a glorious Southern meal for lunch — complete with live music, since it was a Friday, of course! 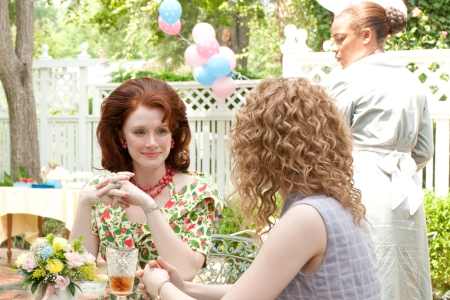 It was a gay old time in the South, which was a key element for Bryce Dallas Howard, who had to dig deep to embrace Hilly’s machinations and the racism of the ’60s.

SheKnows: Octavia Spencer (Minny) told us that every day, she looks forward to seeing what you’re wearing. Have you adjusted to seeing yourself as ’60s Queen Bee Hilly?

Bryce Dallas Howard: It’s pretty insane. What’s interesting is when you start doing a role, at first the image of the character is very shocking. Then you play the character 18 hours a day. Proportionally, you’re in character more hours than you are yourself, so [when I take off Hilly’s wig], I’m just, “Oh right, I have long hair! That’s so weird…” Also because the character is so despicable, there’s a couple of times that I’ve gone to watch playback — just to see a gesture that I did so that I could match it — and I literally cringe. I don’t want to look at it. She’s such a terrible person.

SheKnows: We’ll get to that! But first, what did it take to nail down Hilly’s accent?

Bryce Dallas Howard: It’s fun. I love [doing] it, but I appreciate and need the support of a dialect coach. I wouldn’t know where to begin, in terms of the nuance of the accent. I would probably do a broad Southern accent. Nadia, the dialect coach, has been really specific. She’s recorded a lot of people whose dialect would be pure, according to the time period — people who have retained their accent from the ’60s or were part of the junior league and the social circles these women would have been a part of. It’s a mishmash of a bunch of recordings and trying to find a right balance.

SheKnows: Did you do a lot of research on the era, as well?

Bryce Dallas Howard: The research I did was fascinatingly personal. My mom was raised a lot in the South and when she was growing up in the ’60s and ’70s, she was at times ostracized and called “The Northerner.” She started reading The Help and had to put it down, because it was so intense for her to read it. Now she’s picked it up again and was like, “It’s such a good book, but I can’t read it before bed. I can read Stephen King or Anne Rice before bed, but I have to read The Help during the day,” because it rattles her. I spent a lot of time talking to her about her experiences and what was normal and what wasn’t. It’s fascinating.

SheKnows: What’s the secret to playing someone who is so charming and yet so mean-spirited and racist?

Bryce Dallas Howard: She’s this duplicitous character, in that way. Someone gave me some great advice. I was doing more of an arch villain thing, at first. She said, “Bryce, you have to protect these women in this time and all this devastating honesty.” Most women were not like Hilly. Hilly is a particular person, clearly, but it is important to play that she’s not just a two-dimensional character: She believes in certain things. It’s not only misguided; it’s evil, but there is an origin for her beliefs. To not just play this crazy character, it’s important to understand the psychology behind it.

SheKnows: Is it hard to embrace Hilly’s dark side?

Bryce Dallas Howard: She’s not a nice woman, but it’s fun to be such a terrible character. The truth is, in reading the book and the script, it’s really a salacious read. It’s juicy, but it does at moments get quite heavy, so Tate [Taylor, the writer/director] has created this playful, joyful environment onset. We’re having such a wonderful experience together. In those moments where it’s intense and incredibly loaded, given our history as a country, we don’t fall into this lull as actors, thinking, “Oh my gosh, this is just too much.” Normally, with a character like this, I would not be able to sleep at night, but because of the feeling Tate’s created on set, when she’s evil it’s more fun than scary.