Bree Olson may no longer be Charlie Sheen’s goddess, but she tells Playboy that he is a winner in bed. 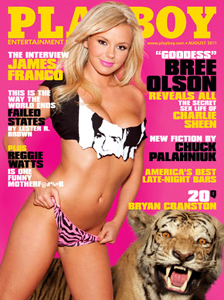 Bree Olson is on the cover of the August Playboy and she is dishing on all the dirty details of her time as one of Charlie Sheen’s goddesses.

“He’s good in bed,” she says. “I mean, he’s had a lot of practice… [he’s] just a rock star. He’s a powerhouse. He is a very sensual and sexual person, and when I was with him, I felt as if we became one together, because he’s just so enticing sexually.”

Olson said that although she and Natalie Kenly, Sheen’s other goddess, sometimes shared the bedroom with the former Two and a Half Men star, they usually had relations with him one-on-one.

“I’m still a goddess,” she said, revealing that she left Sheen’s home because she was not comfortable with the arrangement. “I’m just not Charlie’s goddess.”

So what’s next for Olson? She said she wants to retire from the adult film industry to become a real actress.