Katie Holmes says rather than battle with her daughter, she lets her figure out on her own that she’s wrong — frigid weather or not. 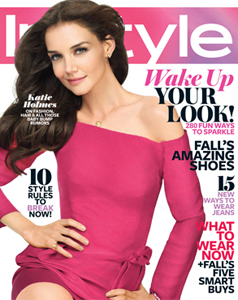 Poor Suri Cruise must be freezing all winter long, judging from the plethora of paparazzi pics we see of her gallivanting around New York City without a coat while under the care of her mom Katie Holmes. What is the deal?

In an interview with InStyle, Katie says it isn’t worth the fight because Suri will figure out sooner rather than later that she’s cold.

“Recently, Suri and I were taking a walk and a fight got started because it was cold outside and she didn’t want to wear her coat,” Holmes explained. “My philosophy is, well, fine, because after a block of walking you’re going to ask me for your coat. So the pictures of her [without a coat in cold weather] are sort of embarrassing, but I said, ‘Suri, I’ll take the hit. Just put it on when you get cold.'”

That’s a great idea, until the kid gets pneumonia.

It won’t do us any good to get all judgey on the Internet, though. Katie says we generally have it all wrong, anyway.

“It’s a constant battle. Whenever I think, oh good, it’s calmed down, another false story comes out. I feel like I’m constantly saying, ‘No, no, I’m actually this way!’ I try not to go on the Internet that much because who needs to hear comments? But I do know what’s being said: I am briefed.”

Professional Internet gossip briefer to the stars: Where do we apply for that job?

Check out the entire interview in the August issue of InStyle.