Hugh Hefner is dead again, well sort of… With another death hoax circling the Internet, Hef himself took to Twitter to downplay rumors of his demise. The 85-year-old founder of the Playboy empire is still enjoying life, still involved with young women and still in good health. As a matter of fact, he stated, “Rumors of my death are greatly exaggerated.” 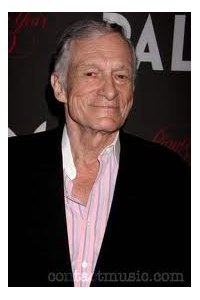 Hugh Hefner, the 85-year-old founder of the Playboy magazine empire, was reportedly dead of a heart attack on July 11th, that is until he took to Twitter to tell fans that he was indeed quite alive and in good health.

Said Hefner on Twitter, “The rumors of my death are, as Mark Twain observed in a similar situation, greatly exaggerated. I’m very much alive and kicking.”

He then followed with, “I’m lying in bed next to Shera Bechard with a big smile on my face, reading tweets about my unexpected demise.” Ms. Bechard is his 24-year-old current girlfriend.

Hef’s life and career have been covered in controversy, ever since the first Playboy magazine hit newsstands in 1953. He financed his first issue by selling his furniture and gathering about $8000 from 25 investors.

He was arrested in 1963 for printing illegal photos of starlet Jayne Mansfield. He married his first wife Mildred Williams and that marriage lasted 10 years, but was marred with rumors of infidelity by Hef. He was also married to Kimberly Conrad in 1989. He has four children, daughter Christie (who has since taken over the Playboy empire), son David, and sons Cooper and Marston.

Hef has always had a reputation as a ladies’ man. At one point, he had seven girlfriends at once! He has capitalized on this, creating the hit television series for E!, The Girls Next Door, which starred playmates Holly Madison, Kendra Wilkinson-Baskett and Bridget Marquardt. Madison and Wilkinson-Baskett went on to star in Holly’s World and Kendra, becoming minor stars of their own.

Hugh recently made headlines when his wedding to playmate Crystal Harris was called off four days before the event. Harris cites infidelity on Hefner’s part, Hefner said it was the other way around. He has since rebounded with Shera Bechard.