Mathew Knowles says he is not a thief — and he just filed legal papers to try to prove it. 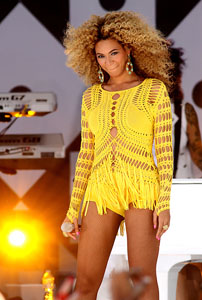 If you were your dad’s boss, how bad would he have to screw up before you fired him? What if you thought he stole from you?

When Beyonce fired her father in March we were left wondering why — after all, he had been in the post since she was a kid. Now, because of some legal papers Mathew Knowles filed, we know why: She thought he was stealing from her.

Mathew says Live Nation Entertainment wanted desperately to get themselves a piece of the action of Beyonce’s 2011 world tour, going so far as to tell Bey that her dad “had stolen money from Beyonce on her most recent tour or otherwise taken funds that [he] was not entitled to,” according to the court documents.

Live Nation was so good at convincing Beyonce that she had her lawyers audit past tour financials, and their findings backed Live Nation’s accusations — meaning they found proof Beyonce’s own father was stealing from her.

Mathew insists he did not steal a dime from his daughter and wants a judge to allow him to depose certain Live Nation employees to figure out how and why they decided he’s a thief. Then maybe Beyonce will give him his job back.