We’ve been waiting for Emily Maynard’s tell-all interview during The Bachelorette with Chris Harrison and while there were a lot of tears, it really wasn’t that shocking. Read on to find out what she said. 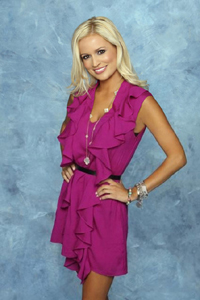 During this week’s episode of The Bachelorette, Emily Maynard opened up to Chris Harrison about her breakup with Brad Womack. Brad Womack wasn’t there to share his side of the story, but we’re not sure it would have mattered had he been there.

The details we knew going into the Emily Maynard interview with Chris Harrison were the basics: Distance was a problem, Brad Womack blamed himself and they weren’t engaged anymore. The drama of tears and seeing her heartbroken face on camera added to the story we’ve been seeing in print, but it was hearing how it all really happened that gave us some insight into the couple who is no more.

Emily Maynard told Chris Harrison, “I thought we’d be planning a wedding the next time I saw you,” before she started tearing up. She should have bought stock in Kleenex before the interview because we’re pretty sure she used it all on herself during the interview.

She assured us that Brad Womack is “such a gentleman” and that’s why she fell for him in the first place. And that’s when we almost threw up a bit.

Anyway, once the cameras stopped rolling the trouble started. She began looking for an apartment for her and her daughter in Austin, Texas but “red flags” started popping up that made her not “secure” he’d be there months down the road. What were the “red flags?” Who knows, she didn’t tell us.

Be warned, just because she confirmed they aren’t engaged doesn’t mean she wants anyone to talk bad about him. Emily Maynard revealed that she’s talking now because “for so long we left the dot, dot, dot and I’m just ready to say it.” Again with the dot, dot, dot. Has she been hanging out with Ashley Hebert and Bentley Williams?

Emily Maynard said she’ll “always be in love with Brad” but realized her “want overshadowed reality,” adding, “No one’s more disappointed than I am.” Her next move? Just being a good mom.

So, did she reveal if she’ll be on the next season of The Bachelorette? Nope, no word yet. We can only hope Bentley Williams will go nowhere near Emily Maynard now that she’s gone public about her breakup with Brad Womack.

What did you think of Chris Harrison’s interview with Emily Maynard during The Bachelorette? Did it tell you anything you didn’t already know?