A steamy date in Taiwan with Ben F. and a crazy wedding photo date helped Ashley Hebert narrow her men down to four on this week’s episode of The Bachelorette. Keep reading to see how she broke the field down to J.P., Ames, Ben F. and Constantine for next week’s hometown dates. 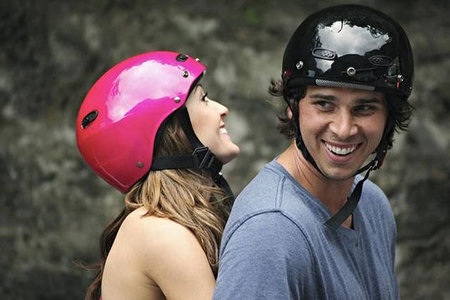 This week, there were three one-on-one dates with no roses to worry about. The first date went to Ashley and Constantine. They took a cute little steam engine train to a small village and tried to progress their slow relationship. They got off to a good start with the romance of the train and kept the love going with wish lanterns. When they released the wish lanterns into the sky, it was a truly special moment. Okay, enough sappiness. They are sweeter than a bottle of syrup.

On to Ben F. and Ashley’s date. The two who have our vote to end up together hopped on a moped. What better way to hold on tight to your man than by cruising through Taiwan on a moped. Can we say fairy tale? It was so romantic watching them kiss and snuggle on a bridge. In fact, it was so romantic, Ben F. never made it home from their date until the next morning and it totally made all the guys jealous. J.P. was the most irritated due to his “supposed” bond with Ashley. Calm down, they didn’t share a room. Before we move on, can we talk about the fact that Ben F. called love the “L-bomb.” How cute was that?

We were getting a tad bored with Ryan’s always smiling face, but we were happy to see him get a one-on-one date so she could finally see they just don’t jive. She noticed it well into the date and couldn’t stop thinking about the fact that she wasn’t really ready to meet Ryan’s family. During a nice little picnic, Ashley Hebert cut him loose instead of making him wait for the rose ceremony.

The group date between Lucas, J.P. and Ames was totally adorable. They took wedding photos so Ashley could get an idea of what it would be like to marry each of the guys. The clothing looked fun and you can see how adorable Ames looks in the picture below. 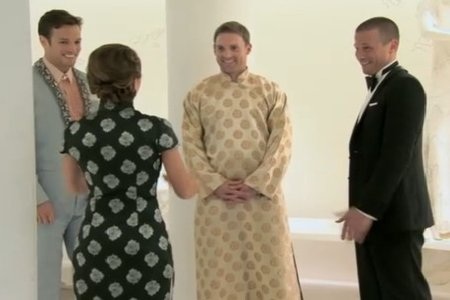 They went with it and snapped some cute wedding photos. None of them looked completely comfortable though. J.P. pouted the whole time. He was still brooding over Ben F.’s overnight with Ashley. Lucas also felt the green-eyed monster and told her during the evening portion of the group date. Putting it all aside, Ashley spent time getting to know Lucas but eventually gave the only date rose to J.P. after he spilled his guts to her.

This week’s Bachelorette rose ceremony was important. It decided who would go on to next week’s hometown dates. We already knew J.P. got a rose. Ames, Ben F. and Constantine followed with their own roses. That means Lucas was sent packing along with Ryan who was eliminated earlier in the show. What do you think of Ashley Hebert’s choice for her hometown dates? Do you agree with her decision? Don’t forget to check out next week’s episode of The Bachelorette.