Jessica Simpson was gifted with an extravagant Hermes bag worth $15,000 for her 31st birthday from her fiancé, Eric Johnson. 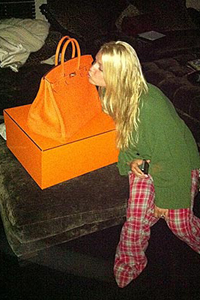 “Eric made my birthday!!! I have never been more surprised in my life! Jackie O who?” she tweeted.

The coveted Hermes Birkin bag has been seen on the arms of Nicole Richie, Lindsay Lohan, Kim Kardashian and Kelly Osbourne. In fact, Ashley Tisdale tweeted pictures of herself with her Birkin after being on the wait list for two years!

Simpson is estimated to be worth around 1 billion dollars, thanks to her fashion empire, so this $15,000 bag is probably small peanuts to her!

Fancy gifts aside, Simpson tweeted that it was “only 1 p.m. and I think I have pretty much heard from everyone in my life! That is a birthday record! Huge smile on my face!”

“Life is such a gift,” she continued. “Thank you to all of my family, friends, and fans for all of your birthday wishes and unconditional love. I’m so HAPPY!”

Simpson and her fiancé Eric Johnson, who was released from the New Orleans Saints in July 2008, got engaged November 2010 and are planning their wedding for sometime this year.

In the meantime, Simpson will be a judge on a new fashion reality show on NBC called Fashion Star.