When asked by the Los Angeles Times if he would ever reprise the role of Harry Potter again, Daniel Radcliffe replied with an emphatic “No!” and continued by stating it would be “self-defeating” to take on that role many years down the line, even if J.K. Rowling writes another Potter book with the boy wizard as the central character. 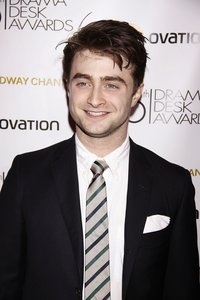 Daniel Radcliffe, riding high on the success of his latest Broadway venture, the leading role in How to Succeed in Business Without Really Trying, is facing some tough questions upon the eve of the release of the last Harry Potter film ever, Harry Potter and the Deathly Hallows Part 2. When asked by the Los Angeles Times about someday reprising the role that made him a household name, Radcliffe had a carefully worded answer.

“Not particularly, I think that would be a bit odd. I’d be very skeptical about that. The idea of going back to something after 10 or 20 years? At that point, to go back to it would feel a little self-defeating.”

These comments were made to the Los Angeles Times after author J.K. Rowling revealed she would be partaking in a project called Pottermore. Pottermore is an interactive Internet site, where Rowling will sell her books as e-books and audio books, while providing background details on characters and settings that Rowling says she’s been “hoarding for years.” The site launches on July 31st, Harry Potter’s birthday, when one million fans can compete in challenges to gain early access. The site opens up to everyone for free on October 1, 2011.

Said Radcliffe of Pottermore, “I know nothing about that (Pottermore) whatsoever. I’m sure that Jo (Rowling) will be writing a lot more in the coming years.”

Daniel also revealed to Star News he took the spectacles he’d worn on the first Harry Potter film (Sorcerer’s Stone) and the ones he wore on the last one (Deathly Hallows Part 2). Said Radcliffe, “It’s a moment where you just have to let yourself sit back and say, ‘This is pretty damn cool! This will never happen to me again! This is a one off!'”