Christie Brinkley has decided that, after four failed marriages, she will never get married again. Pretty strong words for this uptown girl. 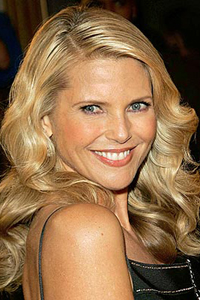 Christie Brinkley looks great… end of sentence. “People say, ‘You look so great for your age,’ and I say, ‘OK, you can leave off the for your age part. Can we all stop qualifying it?’ I have never hidden my age: I love being 57,” she tells The Telegraph.

It is true that Brinkley, who is currently playing Roxie Hart in the Broadway show Chicago, looks much more youthful than her actual age. Good genes or good plastic surgeon? We may never know as Brinkley is not talking about that, but she is opening up about her four failed marriages.

She married her first husband, Jean-Francois Allaux, and divorced him in 1981, followed by Billy Joel and Ricky Taubman. Her marriage to her last husband, Peter Cook, ended badly when he was caught having an affair with an 18-year-old girl and even paid her $300,000 to keep quiet.

She and Cook have two children, Jack and Sailor, together — and she was awarded sole custody, however, in the divorce settlement she had to pay him $2.1 million and allow him “parenting time.”

“I can now say unequivocally I would never get married again,” she says. “There’s absolutely no reason to. I learnt in my divorce that marriage is ridiculous. You take a vow but you don’t get brownie points when you honor your vow and the other person doesn’t. The court doesn’t recognize that. It’s like, ‘All right now, let’s see how we’re going to divvy up the kids.’ Well, obviously, the one that didn’t break the vows should be the role model. But no…”

It is hard to blame Brinkley for being bitter about marriage after everything she has been through. She says she is single and “loving it.”