Russell Crowe is getting serious about losing the pounds. The actor, who gained over 60 pounds for a role in 2008, has been tweeting his weight loss tactics and struggles. 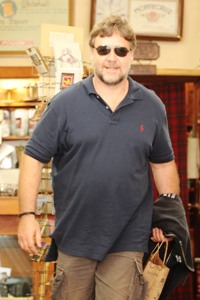 Russell Crowe’s weight loss journey is being chronicled on the star’s Twitter page for fans to follow. In just 140 characters, the 47-year-old has much to say about his diet plans and the pain along the way.

On June 18, just three days after Russell Crowe is pictured here having lunch with a friend in Los Angeles, the get fit journey began. “First ride in quite some time,” Russell tweeted. “Sore legs, sore [expletive], be worse tomorrow and the next day.”

In response to a Twitter fan, Russell, who packed on 63 pounds for his role in Body of Lies, explained, “If i stop exercising my body tries 2 return 2 its heaviest weight.”

Russell Crowe’s weight loss system reportedly involves a 105-day plan during which he will be “taking in roughly 2400 cal/2600 cal [including] all beverages.” Guess that means no guilt free beer drinking!

Other snippets from Russell Crowe’s weight loss tweets include a post workout “I’m toast,” the odd “There is a long way to go, one layer of tissue paper per day of effort and diet,” and descriptive “body movement with weighted objects” and “sweaty 4-shirt mornings.”

The father of eight-year-old son Charlie and five-year-old son Tennyson has been through the weight loss rigors before. In 2009, it was reported Russell was using a state-of-the-art gym on the set of Robin Hood to stay in shape. A source said, “Russell is a professional. He knew he was cast to play Robin Hood, not Friar Tuck. He knows he has to stay fit.”

Fans will next be able to see Russell in the upcoming The Man with the Iron Fist. Best of luck to Russell Crowe on the weight loss!