Will producers of ABC’s Modern Family replace baby Lily with someone new? Possibly.

Say it isn’t so! Producers of Modern Family are reportedly looking to recast the twins that play the adorable adopted daughter of Mitchell and Cam on the ultra-popular ABC comedy. 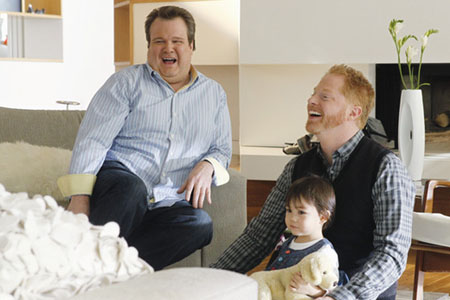 “We adore Jaden and Ella, but have started to think that they’d rather be at home playing than working as actors,” executive producer Steve Levitan told Entertainment Weekly. “If we end up making a change, it’s only because we want what’s best for them.”

Rumors are flying that the producers have set feelers out to find an “Asian, 3- to 4-year-old” to replace the twins that currently play the role of Lily.

Levitan previously hinted to the entertainment magazine that the twins might not be the right babies to play the character.

“We all may determine that as gorgeous and sweet as Jaden and Ella are, it’s not what they signed up to do or what they love,” he said. “Maybe they don’t love to be on a set and have to listen to us do a scene 10 times. Maybe they would be happier being kids. We don’t want them to be unhappy. If we feel it’s not in their best interest to stay, we will replace them, and ask that people forgive us for doing so.”

So, maybe they don’t have the personalities to play an adorable child character a la Mary Kate and Ashley Olsen — and that’s OK. However, we do think the producers should give them a chance to, oh, start talking before they determine the twins’ casting fate.

Do you think Lily should be recast on Modern Family?