Joe Jonas tried to win over the hipster crowd in Brooklyn last week and failed, miserably. 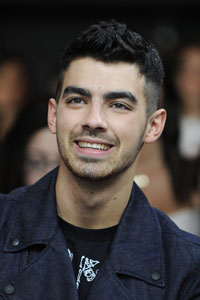 There are certain things that hipsters like: handlebar mustaches, Ray Ban Wayfarers and sticking it to “the man.” Then there are things hipsters don’t like: showers… and Joe Jonas?

Yep, the crowd at last Wednesday’s Paper Magazine party in Williamsburg, Brooklyn, wasn’t too receptive to Jonas’ performance, according to the New York Daily News.

“Audience members at the Paper magazine party pelted him with mini-basketballs and greeted his performance with a mixture of derision and stony silence,” according to a post on the paper’s Gatecrasher website.

“Save for a group of adoring girls at the front of the crowd, Jonas did not encounter very much love from the hard-core Williamsburg crowd in their frayed jeans, acid-washed tanks, jean vests and oversize eyeglass frames,” the article continued.

Why did Jonas agree to open for Swizz Beatz at the fete? He’s trying to cultivate a new image with his solo album, Fast Life.

He tried to get the audience with questions like, “How you guys doing tonight? Let’s have fun! Lemme see them drinks in the air!”

The audience — and likely Jonas — was relieved when Swizz Beatz took the stage a little while later.

Don’t feel too bad for the single Jonas, though — he was spotted flirting with model Karlie Kloss at Prince William and Kate Middleton’s L.A. charity polo match on Saturday. The pair even posed together for fun photobooth snaps.

Maybe he was inspired by Wills and Kate?

“They are an iconic couple… I think everyone wants to find their Kate,” Jonas told Us Weekly.

Just as long as she’s not a hipster, right Joe?