Zooey Deschanel isn’t happy that a Los Angeles Times writer called her a name in a new article — and she took to her blog to write about it. 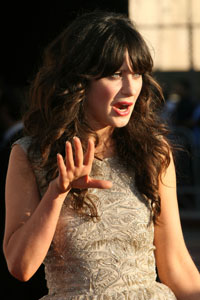 How would you react if someone called you a “snobby cow?” You’d probably have a few four-letter words for them, right?

Not if you’re actress Zooey Deschanel. The (500) Days of Summer actress wrote a civil open letter to Los Angeles Times opinion writer Patt Morrison on her new website, Hello Giggles, after Morrison referred to her as an uptight bovine in an article.

“I can’t believe Zooey Deschanel is really the snobby cow she came off sounding like Saturday evening,” Morrison wrote. She was referring to a comment Deschanel reportedly made to her friend, USA Today critic Claudia Puig, about Prince William and Kate Middleton’s visit to Los Angeles at the black-tie Hollywood BAFTA gala.

“I just don’t want them to see the worst of L.A.,” Deschanel allegedly remarked about neighborhoods surrounding the gala’s venue, the renovated Belasco Theatre.

Deschanel wasn’t too happy about the piece, naturally.

“I am completely and utterly shocked that a professional journalist, whom I have never met, would take a partial quote out of context and use it as the basis for a misguided personal attack,” Deschanel said. “Further, I find it appalling that you would resort to name-calling to get your point across. In a court of law this would be called hearsay, and in journalism, I believe this should be the beginning of an investigation, not the end of one.”

She then explained what she really said.

“I did make a reference to a parking lot adjacent to the theater that had a lot of trash in it in an attempt to be humorous. I simply said, ‘It’s funny they brought royalty here, there is a parking lot with trash around the corner.’ It wasn’t an opinion. It was true. There was indeed a parking lot with trash around the corner,” the actress said. “I thought that the juxtaposition of British Royalty and trash was amusing in a high-brow + low brow sort of way, but I never said that I, personally, didn’t like downtown, the Royals, or even trash.”

The actress also clarified how much she loves her hometown.

“I am a native Angelino, and had you done any research at all, you would have found that I have been quoted in the press on numerous occasions talking about how much I love Downtown.”

Deschanel wasn’t the only celebrity to take issue with an entertainment reporter at the gala. Comedian Jonah Hill took to Twitter after a reporter wrote comments about him that he didn’t say.

“I literally didn’t even speak with @ew last night and they made up every word I said,” Hill wrote on Twitter. The magazine later posted a correction.

What do you think of Zooey Deschanel’s open letter?