Kate Hudson had said all along she thought she was having a girl — which may explain why she still has not decided on a name for her baby boy. 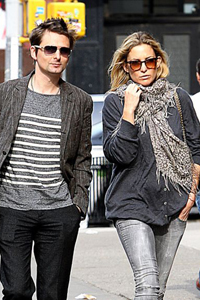 Could it be because Hudson only had girl names picked out? The couple decided not to find out the sex before the baby was born, however, she told Ellen DeGeneres that she was pretty sure she was going to have a girl this time — and even referred to her baby as “her!”

“Everything’s been so different, which is why I think it’s a girl. And it definitely doesn’t belong to me anymore — this area,” she said, gesturing to her stomach. “It’s all hers. So, I feel like that means it might be a girl.”

Hudson has one son, seven-year-old Ryder, with her ex-husband.

Bellamy said in an interview that not knowing the sex of the baby did make picking baby names a challenge. “We’re starting to agree on names. Hopefully we’ll think of something last minute,” he said.

What do you think Kate and Matthew should name their baby boy? I think they will name him something unique and edgy — with a bohemian twist, such as Harley, Smith, Finn, Brooks, Gunner or Reed.

What do you think? Share your baby name ideas for Kate Hudson!