Halle Berry had a scary weekend. The actress found an intruder in her yard not once, but twice! 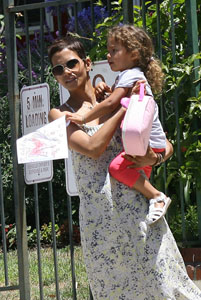 Halle Berry had the bejesus scared out of her this weekend when she spotted an intruder in her yard — twice!

The first incident occurred on Saturday, when the actress spotted a man lurking in her front yard after jumping a privacy wall. Berry called 911 while several people who were in the house with her at the time chased after the guy, but he scaled the wall and got away.

Fast forward to Sunday. Berry was standing in her kitchen when she saw the same guy through her window, staring at her and holding a book. Creepy!

The actress again called 911 but even after circling the neighborhood for half an hour in a helicopter, police were unable to find the suspect.

The theory of police is that the stalker is either a crazed fan or an overzealous paparazzo. The theory of anonymous Internet commenters is that Halle is making it up so she can build a case to move her daughter Nahla out of the country — she is currently embroiled in a bitter custody battle with her baby daddy Gabriel Aubry.

The theory of this writer is that Berry needs a better home security system around that privacy wall.