Horrible Bosses and Zookeeper performed this weekend, but Transformers: Dark of the Moon would not be stopped. In addition to winning the July 8-10, 2011 weekend stateside, Transformers 3 continues to dominate the world.

Transformers: Dark of the Moon banked another $47 million this weekend, securing its place as the number one movie for the second weekend in a row. It’s showing stronger staying power than its (terrible) predecessor, Revenge of the Fallen; and with less than two weeks in theaters, it’s also blown past The Hangover Part II to become 2011’s top-grossing movie, with a total bank of $261 million. 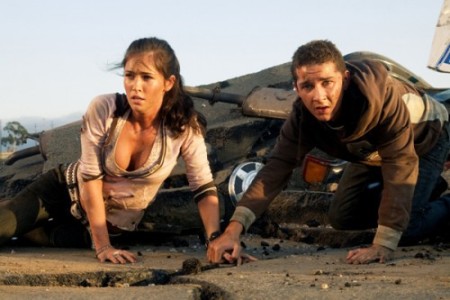 In the global market, Transformers 3 seems unstoppable. The juggernaut hit $500 million before this weekend started and by weekend’s end, was up to $645 million. The third installment in the Transformers franchise could easily breach the billion dollar mark — unless Harry Potter gets in the way!

The much-hyped Horrible Bosses performed reasonably well, considering the competition, banking a $28 million opening. That beats Bridesmaids‘ opening, but not Bad Teacher‘s. It’s definitely a win for Jason Bateman, Jennifer Aniston, Jason Sudeikis and Charlie Day, who didn’t score as high with their last summer contenders, The Switch and Going the Distance.

Kevin James’ Zookeeper banked $21 million for third place. Unlike Horrible Bosses, however, it’s not getting glowing ratings. That opening beat James’ last flick, The Dilemma, and past animal tales like Marmaduke and Cats & Dogs: The Revenge of Kitty Galore, but not his own Paul Blart: Mall Cop.

Cars 2 banked another $15.2 million, bringing its total take to $148.8 million. Sounds like a big haul, but not when compared to other Pixar movies in their third week. In fact, Cars 2 may close as Pixar’s lowest performer to date.

Bad Teacher stayed in the top five. A $9 million weekend puts the Cameron Diaz and Justin Timberlake collaboration at $72.8 million.

Green Lantern stayed in the game another week, banking $3.1 million to bring its total to $109.7 million. With a worldwide take of $143 million, the Ryan Reynolds/Blake Lively flick does seem capable of recouping its $200 million reported budget.

Jim Carrey’s Mr. Popper’s Penguins closed out the top 10 with $2.9 million, finally pushing Bridesmaids and Midnight in Paris out of the top tier.

Next weekend will be a whole new game, with Harry Potter and the Deathly Hallows Part 2 dropping on July 15. The Winnie the Pooh revamp also lands, along with very limited releases of Girlfriend; Life, Above All; Lucky; Salvation Boulevard; Snow Flower and the Secret Fan and Tabloid.