Mila Kunis will be attending the Marine Corps Ball this November, thanks to an ambitious army sergeant who thought to post a video on YouTube asking the star to be his date. Lucky guy — she said yes! 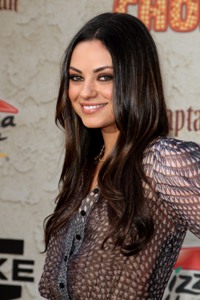 Mila Kunis isn’t about to dash the hopes and dreams of an army sergeant stationed in Afghanistan by turning down his date request. The Black Swan star was persuaded to say ‘yes’ by Sgt. Scott Moore’s YouTube video invitation, and a little prodding from her Friends with Benefits co-star.

In the 19 second video (watch below!), Sgt. Scott Moore is shown in Afghanistan saying, “Hey Mila, it’s Sergeant Moore but you can call me Scott. I just want to take a moment out of my day to invite you to the Marine Corps Ball. Take a second, think about it, get back to me.”

Over the weekend, Mila Kunis did an interview for Fox News with co-star Justin Timberlake, during which the correspondent brought up Moore’s video. Though Mila hadn’t heard about it yet, Justin had plenty to say.

“Have you seen this?” Justin Timberlake interrupted excitedly. “Have you heard about this? You need to do it for your country.” Justin, speaking out to Moore, then said, “I’m going to work on this, man. This needs to go down.”

After a quick chat with her publicist, Mila Kunis then agreed, “I’ll go, I’ll do it.”

Sgt. Scott Moore, your Mila Kunis date dreams are about to come true!