What are the 10 saddest moments in the Harry Potter series? Read on to find out!

The Harry Potter series was ultimately a tale of the triumph of good over evil, but along the way there were plenty of moments that left us reaching for our box of tissues. Here are the top 10 saddest Harry Potter moments — many of which revolve around the deaths of people Harry loves and respects. Warning: If you’re a late blooming Harry Potter fan still catching up, proceed with caution. 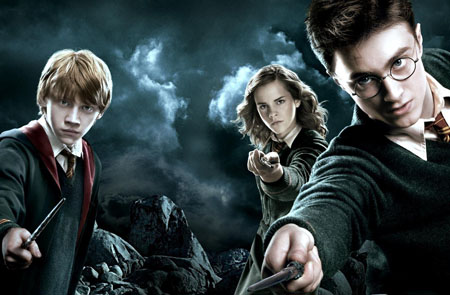 10. The death of Cedric Diggory

Cedric Diggory could have been Harry Potter’s greatest rival, but his fair and modest nature meant he was nothing less than a great friend. In fact, it is his loyalty to Harry and fairness that causes his death. Cedric claims the Triwizard cup with Harry at the youngster’s insistence, and when the portkey transports them both to the graveyard, Pettigrew immediately kills Cedric on Voldemort’s orders.

9. Harry’s family appears in the Mirror of Erised

Harry accidentally stumbles upon the Mirror of Erised while seeking information on Nicolas Flamel — and what he finds reminds him of what he lost. When he peers into the mirror he sees what he most desires: His family. When young Harry tries to hold his mother’s hand, there’s nothing there.

8. The death of Sirius

After being accused of betraying Harry’s parents, escaping imprisonment in Azkaban, clearing his name, becoming a mentor to Harry and dedicating his life to help Harry fulfill his destiny, Harry’s godfather Sirius is struck down by his own cousin Bellatrix Lestrange. Harry witnesses the death of Sirius — the closest thing he has to blood family — and is utterly devastated.

7. Any time the dementors came around

Ugh, those dementors are just a total buzzkill. They suck — literally. The dementors feed on human happiness, sucking them dry off all positivity and leaving their victims to relive their worst memories over and over again. Even worse is the Dementor’s Kiss, which leaves the victim soulless and catatonic.

6. Hermione is all grown up

Hermione appears at the top of the steps in her gorgeous gown for the Yule Ball and utterly blows everyone away with her loveliness — and with how grown-up she is. It is the moment we realize these kids won’t be kids much longer, and therefore the tale will soon be coming to an end.

5. Ron leaves his friends behind

When Ron falls under the dark influence of the horcrux he is wearing to prevent it from being lost or stolen, he lashes out at Harry and Hermione for their lack of a plan and he temporarily leaves the group. Harry and Hermione are so devastated that they can’t even bring themselves to say his name.

4. The death of Dobby the house elf

Poor Dobby spent much of his life being treated cruelly by the Malfoys, so much so that his new job at Hogwarts — which paid him a pittance and afforded him only one day off a month — struck him as a glorious freedom. He, too, died for Harry Potter: He was fatally wounded by that nasty Bellatrix Lestrange while apparating Harry and Griphook to safety. Harry dug Dobby’s grave himself and carved him a gravestone that read “Here lies Dobby, a free elf.”

No one could have imagined the most beloved character in modern children’s literature dying — but that is exactly what Harry decided he must do when it was discovered that he himself was a horcrux, and that Voldemort could only be killed is Harry sacrificed his own life. Luckily during his short time between life and death the spirit of Dumbledore pointed out the loophole in this plan, allowing Harry to come back to life and defeat Voldemort once and for all.

The most shocking moment in the Harry Potter series is also one of the saddest: The death of Dumbledore at the hands of Snape. While the incident seemed to prove that Snape was inherently evil, we later learn it was actually an act of true loyalty to Dumbledore himself, and that Snape is dedicated to Harry’s safety.

The saddest part of Harry Potter is the fact that the beloved series had to end at all. While the epilogue shows that many of the characters an entire generation grew up with have lived happily ever after, we still know we will never be invited to be such an intimate part of their lives again.

Tell us: What do you think was the saddest part of the Harry Potter series?

read on for more harry potter