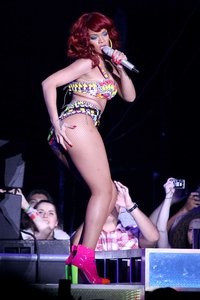 Rihanna set her stage on fire in Dallas and we don’t mean figuratively. Fans were evacuated from the Dallas concert on Friday night (July 8) after a fire broke out around the stage.

According to a witness, a light above the stage was the cause of the blaze at the American Airlines Center where Rihanna was performing as part of her Loud tour.

The singer tweeted, “DALLAS!!! We set the stage on FYAH tonight!!! LITERALLY!!! I’m so pissed, I was havin so much fun wit yall too!!! I gotta come back man!!”

Dallas Fire-Rescue immediately dispatched firefighters to the arena after hearing numerous reports that the stage curtains and some of the singer’s set pieces were on fire. By the time the firefighters hit the scene, the fire was out.

KTVT-TV reported that riled-up concertgoers wanted their money back — well, we would too. But it’s not like it was Rihanna’s fault.

“DALLAS yall CRAY!!! Love this [expletive] place! Glad u guys are safe!!! I promise I’ll be back!!!” The singer finished, “Heading into a production meeting to find out exactly what happened!!! Keep u posted.”

Fans also hit Twitter to make all kinds of puns about the concert, including, “Rihanna set the stage on fire!! No really. She did. We had to evacuate.” Oh, the jokes are endless at this point. It’s just a good thing no one was injured.

Rihanna is hitting the U.S. up with her Loud tour and will eventually also hit South America and Europe.

Give us your best “Rihanna’s concert goes up in flames” jokes. We know you have them.