Emily Maynard met Brad Womack on The Bachelor and fell in love. Now, Maynard is back to dish her split with Womack to Chris Harrison during Monday night’s episode of The Bachelorette. Oh, how things change over the course of a few months.

Before we get too excited over Chris Harrison’s tell-all interview with Emily Maynard during Monday night’s episode of The Bachelorette, let’s remember we still have to sit through two hours of Ashley Hebert sifting through her men to decide on her hometown dates. It’s kind of sad knowing the couple who met on The Bachelor is over, so we thought we’d take a look back with their season finale picture. 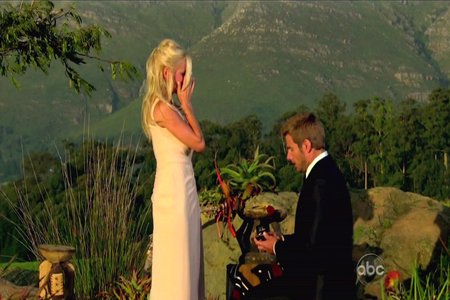 Okay, that’s over. Let’s face it, if we’ve learned anything, we know the juicy updates usually come somewhere towards the end, which is when Emily Maynard’s interview will air and last about 15 minutes, according to reports.

When Ashley Hebert and the guys of The Bachelorette hit Taiwan for romantic dates, jealousy issues arise when one guy (Ben F.) doesn’t return home from his date until morning. There’s also some fun wedding picture mayhem set to take place that leads to a kiss that the other men don’t want to see.

Yeah, that’s all fine and dandy but we’ll really be glued to our televisions waiting for Emily Maynard to speak out on her breakup with Brad Womack.

Brad Womack, who Chris Harrison says is still too “raw” from the split, wasn’t part of the already taped interview, but at least we’ve got Emily Maynard.

Since announcing her split from Brad Womack, Emily Maynard has been a hot topic. She’s even been linked to being on the next season of The Bachelorette. How ironic would it be if she was on the next season and ABC allowed Bentley Williams to satisfy his obsession with her by having him return too?

Of course, we wouldn’t wish Bentley Williams upon any female, but it would make for good television.

You don’t want to miss Ashley Hebert’s choice for her hometown dates or Chris Harrison’s interview with Emily Maynard on The Bachelorette.

Check out this sneak peek of The Bachelorette!