Jerry Springer denies he made a $1 million offer to Casey Anthony to appear on his show. 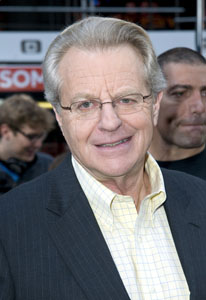 Controversial talk show host Jerry Springer denies he made a million dollar offer to Casey Anthony to appear on his show.

“There is absolutely no truth to this story whatsoever,” said a rep for Springer. The Jerry Springer Show has not made any monetary offer to Casey Anthony and her family to appear on the program, nor will we.”

Springer himself adamantly denied any such offer had been made — in fact, he says he wouldn’t interview Anthony if he was paid the million dollars.

“God as my witness, I would never interview her,” Springer told a TMZ cameraman on Saturday. “You could pay me the million dollars, I wouldn’t do it.”

Casey Anthony was acquitted on murder charges in the death of her toddler daughter Caylee Anthony. Since she was let go, she is free to profit off of her story in any way she chooses. She is due to be released from jail July 17.