Victoria Beckham has given birth to a healthy baby girl, a family spokesperson confirmed. 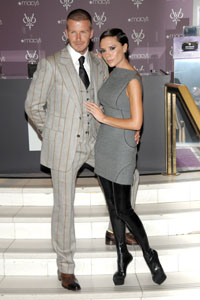 Victoria Beckham and her soccer star husband David Beckham have added a new bundle of joy to their brood. The couple have welcomed their first daughter into the family!

Beckham family spokesperson Simon Oliveira said the couple is “delighted to announce the birth of their daughter… Happy and healthy she arrived at 7:55 am this morning at Cedars Sinai hospital in Los Angeles and weighed 7lbs 10oz.”

“Brooklyn, Romeo and Cruz are excited to welcome their new baby sister to the family,” added rep Jo Milloy.

The birth was cutting it a little close to a very important social event — David Beckham was spotted crashing the Friday night party for his pals Prince William and Kate Middleton at the home of British Consul-General Barbara Hay.

“Victoria really wanted to come but she is just so tired at the moment,” Beckham was overheard telling William. “She sent you both lots of love.”

No word on a name yet, but SheKnows will have the news as soon as it is announced!

Tell us: What should Posh & Becks name their baby?

read on for more victoria beckham