Prince William and Kate Middleton have arrived! The pair touched down in Los Angeles and went straight to work promoting British business interests.

If Hollywood needed extra glamour today, it got it. Prince William and Kate Middleton arrived at LAX in high style, ready to kick off a weekend of festivities honoring Brits in the USA. 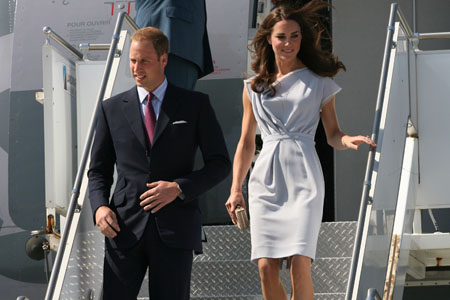 The Duchess of Cambridge stepped her already flawless style up a notch, wearing an exquisitely tailored Peridot dress by Roksanda Ilincic in lavender with nude pumps with much higher heels than we usually see her wear. William wore a suit or something, no one cares.

LA is a party town, but Will and Kate have business to attend to. They headed straight to the Beverly Hilton to attend Variety’s Venture Capital and New Media Summit to support the UK Trade & Investment Organization and support development of London’s Tech City initiative.

Afterwards, Will and Kate will retire to the home of UK Consul-General Dame Barbara Hay for the night — and the rest of the couple’s California schedule is just as packed.

Tomorrow, Will and Kate head to Santa Barbara for a charity polo match, then will spend the evening as the guests of honor at a British Academy of Film and Television Arts dinner, where they will be joined by the likes of Jennifer Lopez, Tom Hanks and Nicole Kidman.

Sunday brings a private breakfast with patrons of an African conservation charity, a visit to Skid Row to see a performance by students at a school providing arts training to children of low-income families, then on to a job fair for military vets getting back into the workforce.

Sunday night the pair gets back on their fabby private plane to jet back to jolly old England. Poor kids won’t even have time to ride Space Mountain at Disneyland!

Keep checking SheKnows all weekend for updates on Will and Kate’s whirlwind visit to California!