For the first time ever, Jaycee Dugard is sharing her horrifying tale of being kidnapped and imprisoned for 18 years. Her memoir, A Stolen Life, hits stands Sunday and that same evening, Dugard brings her story to ABC. The 31-year-old opens up to Diane Sawyer about the entire ordeal, from the day Phillip and Nancy Garrido got their hands on her in 1991 to giving birth on the compound and ultimately, her freedom after being rescued in 2009.

It’s hard to imagine how any woman could survive almost 20 years imprisoned in someone’s backyard. It’s even harder to imagine an 11-year-old girl coming of age in those conditions, let alone a 14-year-old giving birth to her captor’s child, but Jaycee Dugard survived that and more. 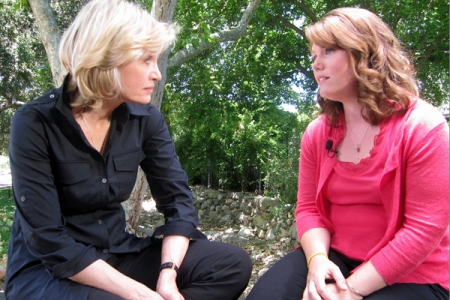 “I wanted to see [my mom] more than anything,” she said later in the interview. “Any day near the beginning was… I would cry every day. And… [it’d] be hardest when I would think about her and what she was doing. And then trying to convince myself she was better without me.”

Dugard and her daughters were rescued in 2009 and on June 2, 2011, Phillip Garrido was sentenced to 431 years and his wife received 36 years to life.

Today, Dugard lives with her mother and two daughters. While the experience still haunts her — how could it not? — she revels in life back in the free world, where she can do “simple” things like speak her own name.

“Now I can walk in the next room and see my mom,” Dugard told Sawyer. “Wow. I can decide to jump in the car and go to the beach with the girls. Wow, it’s unbelievable, truly.”

In this clip, Diane Sawyer reflects on her day and a half with Jaycee Dugard and shows off the pinecone necklace given to her by Dugard. The pinecone has become an important symbol for the survivor. “It was the last thing I touched,” Dugard tells Sawyer. “You know, the last grip on me. Now, it’s — it’s a symbol of hope and new beginnings. And that — there is life after something tragic.”

Diane Sawyer’s exclusive interview with Jaycee Dugard airs Sunday night, July 10, 2011 on ABC at 9/8 C. On Good Morning America, Diane Sawyer gave a preview of what to expect. Will you tune in?