Rebecca Gayheart is pregnant! She and husband Eric Dane are expecting their second child together. Someone else they know pretty well is pregnant too. 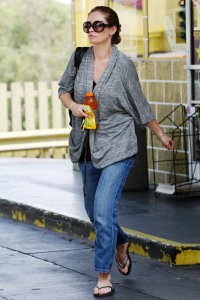 Congratulations are in order for Rebecca Gayheart, Eric Dane and their long lost bathtime pal Kari Ann Peniche. Both Rebecca and Kari Ann are pregnant!

You remember Kari Ann Peniche, the former beauty queen who was videotaped playing dress-up and bathing with Rebecca Gayheart while Eric Dane sat by?

Life & Style reports Rebecca Gayheart’s pregnancy news as confirmed to them by a friend. “She’s glowing — and so happy,” they say. “[Rebecca and Eric Dane] wanted to add another child to their family, and now they’ve got that! They’re in a real good place.”

Meanwhile Kari Ann Peniche has baby news of her own, though the identity of the baby’s father is not yet known. SheKnows reported earlier today, “The former beauty queen’s husband, Justin Williams, has filed for divorce from Peniche, and he has requested the judge order Peniche to undergo DNA testing that would prove who the father of the baby is. The couple has only been married since February.”

Best wishes to both Kari Ann Peniche and Rebecca Gayheart in their pregnancies!

Could it be something in the water?