Jersey Shore‘s Snooki is known for her wild drinking antics, however, her ex-boyfriend blames MTV for turning her into an alcoholic. You mean Snooki was drunk when she tried to make out with a potted plant? 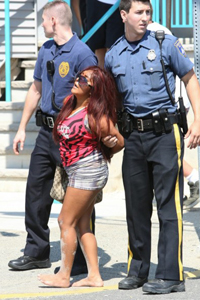 Snooki may have dated Emilio Masella for just two months, but her ex-boyfriend is voicing his concern over Nicole “Snooki” Polizzi and her behavior on Jersey Shore.

Masella took to his Twitter account to share his disgust, saying: “MTV’s Jersey Shore is turning Nicole into an Alcoholic. They are killin her liver. That’s not the nicole I knew! Poor girl.”

He also tweets about the video of a very drunk Snooki attempting to dance with a potted plant. She almost falls into the plant, as cameramen are seen continuing to shoot her drunken antics.

“The Vid on TMZ with Nicole Dancing with the plant, is a total embarrassment. I blame Production,” he says. “They won’t learn till she hurts herself.”

Snooki was arrested last summer in New Jersey for disturbing the peace after falling down drunk on the beach. She was fined $500 and had to do community service and she was 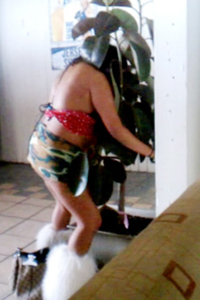 spotted this week being escorted to a police car after a crazy July 4th party.

The reality star told Ellen DeGeneres this year that “I don’t want to be a role model.”

“I want to remember my night and sometimes I just don’t,” she says.

Although Snooki admits it is not always fun and games. “It sucks,” she says. “You’re like, ‘What did I do? Why did I wake up in a garbage can?'”

Check out Snooki, right, dancing with a plant after a long day of drinking.

Tell us: Is Snooki heading towards rehab? Or is it all a show for Jersey Shore?