Katy Perry has postponed two weekend concerts because of illness, says her rep. 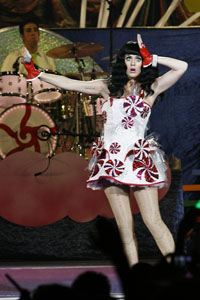 If you were looking forward to dancing up a storm at a Katy Perry concert in Chicago or St. Paul this weekend, you should probably find something else to do. The Last Friday Night singer is suffering from food poisoning and severe hydration, so she had to postpone both shows.

The singer, who just bought a massive house with husband Russell Brand, was suffering Thursday during a performance at Summerfest in Wisconsin and only made it through with the help of a doctor.

“I apologize to my fans in Chicago and the Twin Cities for not being able to perform this weekend,” Katy wrote on her site. “But I am going to return in a few weeks to give them the very best show ever!”

The Chicago show has been rescheduled for August 21 and the St. Paul one for August 23. Tickets will be honored on the new dates or fans can opt for a refund.