Jennifer Aniston had her handprints and footprints immortalized forever at her handprint ceremony outside of Grauman’s Chinese Theatre yesterday — and she brought along her new boyfriend Justin Theroux for support.

Jennifer Aniston was honored yesterday by having her handprints and footprints cemented and displayed outside of Grauman’s Chinese Theatre, joining many other Hollywood legends and stars who have their handprints displayed. 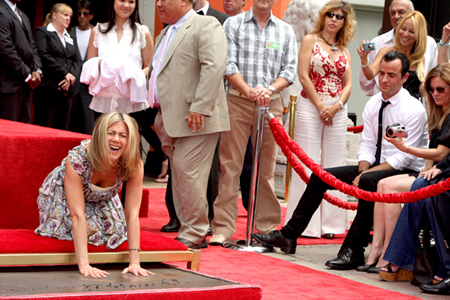 Aniston, wearing a printed Prada dress and tan Gucci heels, giggled as she placed her hands in the cement and autographed her plaque.

Good friends Chelsea Handler and Jason Bateman were there in support of Jen — as was her new boyfriend, Justin Theroux.

Wearing a white shirt and black tie, her newly-shaved man sat front row for the festivities and laughed along with Jen as she cemented her place in Hollywood history. 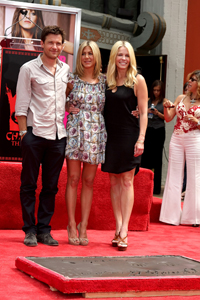 One person noticeably absent? Her BFF Courteney Cox! There have been rumors that the two actresses have been growing apart. I hope that is not the case!

Jen’s good friend, Chelsea, gave her a nice introduction saying that she didn’t have many neighbors like her in New Jersey. “All of my neighbors looked more like Snooki,” she joked. “Her hair alone deserves a star.”

Chelsea went on to joke, “I made the mistake of going on vacation with her… and being photographed in a bikini next to her and then shortly after being compared to Kirstie Alley — pre-Dancing With the Stars.“

Jen took the stage and thanked her friends — and asked what Chelsea was doing on Hollywood Boulevard before 10 a.m. without a bail bondsman. Zing!

Aniston, 42, will get her star on the Hollywood Walk of Fame next June.