SheKnows hit the local “bar” at Sony Studios in Culver City to grab a seat next to the stars of Lifetime’s new police drama, The Protector. On set with Ally Walker, Tisha Campbell, Terrell Tilford and Patty Duke, we found out what The Protector is all about. 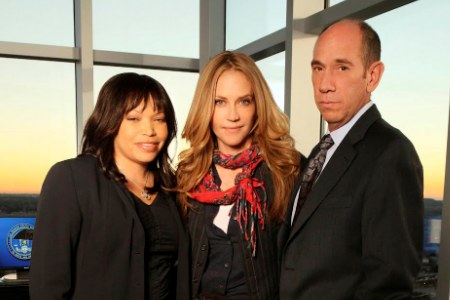 No matter how big a case, however, this mom is not beyond staying up late to sew a costume for the school play. Sheppard is always keeping tabs on her three boys, sons Leo (Thomas Robinson, Heroes) and Nick (Sage Ryan, The Closer) and troubled but helpful live-in brother Davey (Chris Payne Gilbert, Dexter, Bones). Things are only going to get more complicated when her mom (Patty Duke) shows up on the scene!

The Protector has all the elements, but with less than impressive ratings, it seems to have gotten lost in the summer season. SheKnows got on set to learn what TV viewers are missing: Here’s the story straight from the stars.

The Protector airs on Lifetime on Sundays at 10 p.m.

The murders, the partner, the romance, the kids, the sober brother, the wacky mother… We had a lot to cover when we sat down with Ally Walker to talk about The Protector and Gloria Sheppard. Walker dishes her new role, chuckles about the evil she brought to Sons of Anarchy as one of the “good” guys and compares her current duties at the helm of The Protector to her run on Profiler.

My Wife and Kids alum Tisha Campbell is associated with laughter and even as an LAPD detective, she manages to bring that to the screen, but don’t misunderstand: It’s not all fun and games for Det. Michelle Dulcett, Sheppard’s partner. Sure, she gets to flirt with Romeo and you never know who you’re going to find in her bed, but she works in murder and she’s got her hands full keeping her intuitive but complicated partner in check.

What an honor to talk to the great Patty Duke! The Oscar winner plays Sheppard’s bi-polar mom, who will show up on canvas in episode seven. The kids love having their wild grandma around, but it sounds like we can expect some mother-daughter tension.