Zookeeper arrives in theaters as Kevin James’ next headlining role after his smash hit Paul Blart: Mall Cop. Normally a talking animals movie has audiences rolling their eyes. It is the rare film that can achieve success with that premise such as Eddie Murphy’s Dr. Dolittle. The question is: Is Zookeeper more Dr. Dolittle or Cats and Dogs?

Zookeeper features Kevin James as the lead keeper at a Boston area zoo. His life is supposedly perfect as the film commences. He loves his job and he adores his girlfriend (Leslie Bibb). In fact, he is set to propose. When his engagement offer is rebuffed, he is left heartbroken and settles into his life of caring for the zoo animals as his only joy. 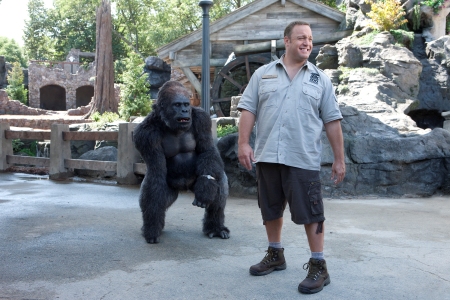 The film fast forwards several years to find James still tending to the animals with the help of his friend and coworker, the zoo vet (Rosario Dawson). Still blind to love, the wild beasts decide they’ve had enough of his complaining about romance woes and decide to intervene.

As we’ve stated, talking animal films are tricky. Many times, it isn’t simply the terrific selection of voice talents who play the animals as much as it is how the film utilizes that storytelling method. The Zookeeper vocal actors are a superstar group from Adam Sandler and Sylvester Stallone to Maya Rudolph and Cher. In Zookeeper, it is when the animals hold a meeting after hours that they begin talking to one another about how they need to help their caretaker. When they reveal their ability to speak to James, his reaction is one of shock, then awe at their interest in helping him in the ways of love.

What works is the comedic repartee between James and his human costars Dawson and Bibb. Bibb’s character reenters his life as the animals begin their effort to bring the zookeeper into the realm of the loved. She is a bubbly comic actress and in many ways, the best part of the film. James is charming and as always, likeable while Dawson has a blast in one of her first comedies. 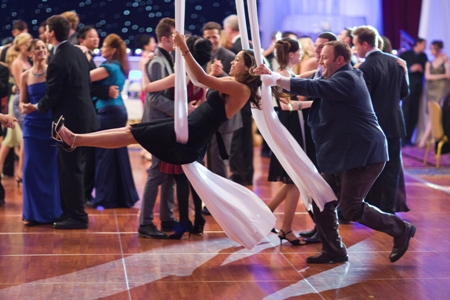 What doesn’t work is how the film can’t quite decide if it is a romantic comedy or a film for kids. Dr. Dolittle knew it was a family film and triumphed. Zookeeper gets a little lost in that confusion.

We must say that Zookeeper was much more enjoyable than expected. Take that as you may, but the film does have its merits. It is mindless fun, which is much more than many summer films can claim. Kids will enjoy it and adults will not be bored, yet some of the romantic entanglements may go over children’s heads.