The Megan Fox botox debate has new evidence to ponder. Please consider ‘wrinkled forehead’ and ‘furrowed brow’ demonstrations as posted on the star’s Facebook page before making your judgment.

Megan Fox botox? Just ’cause it rhymes don’t mean it’s true! The Jonah Hex actress is fighting rumors she uses botox by posting a series of photos on her personal Facebook page. Here for your inspection are two Megan Fox photos. 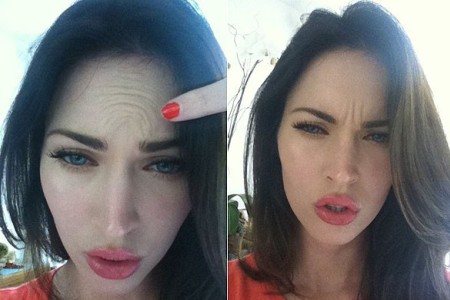 Megan Fox’s forehead wrinkles and furrowed brow are joined by two other photos in an album titled, Things you can’t do with your face when you have botox.

The 25-year-old previously opened up about her self-esteem and insecurity issues in 2009, telling Rolling Stone, “I’m really insecure about everything. I see what I look like, but there are things that I like and things that I dislike. My hair is good. The color of my eyes is good, obviously. I’m too short.”

She continued, “I never think I’m worthy of anything… I have a sick feeling of being mocked all the time. I have a lot of self-loathing. Self-loathing doesn’t keep me from being happy. But that doesn’t mean I don’t struggle. I am very vulnerable. But I can be aggressive, hurtful, domineering and selfish, too. I’m emotionally unpredictable and all over the place. I’m a control freak.”

Do the photos of Megan Fox’s botox-free face have you convinced?

Megan Fox poses for Armani
Megan Fox ‘in tears’ over Shia LaBeouf hook-up confession
Megan Fox: I should have kept my mouth shut