Despite his fears, rapper Bow Wow has found overwhelming support after admitting he is the father of a baby girl. Now the young dad is talking with mogul Russell Simmons about his decision to take the honest road, and detailing which other famous name reached out to show support. 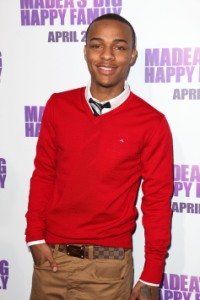 Shocked to hear the big Bow Wow baby news? So was Russell Simmons, who paid a call to the young rapper Thursday. Russell, who says reading Bow Wow’s “pain and joy really moved me,” has shared snippets of their phone conversation on GlobalGrind.

Russell Simmons, who offered congratulations to both Bow Wow and ex-girlfriend Joie Chavis on the birth of their daughter Shai Moss, let the new dad know that people are reaching out to him, saying they love that Bow Wow stood up as a father.

“Wow!” Bow Wow replied. “I’m so used to the media and everybody talking about the bad stuff or the stuff that is really not that important that shouldn’t be out there for fans to see rather than focus on the things that really matter.”

As for the decision to come clean about the baby news, he explains, “I just woke up and felt a certain way and felt like the world was on me… like it was a secret everybody was asking me and I just felt like, ‘Okay, it’s either now or never.’ I wrote it from the heart so when everybody accepted it — you know when you retweeted it — I couldn’t believe it! I was like, ‘Oh man, this is crazy!'”

When friend and actor Tyrese heard the news, he got in touch with Bow Wow as well. The new father explains, “Even Tyrese, who’s a good friend of mine, called me and was like, ‘Man, you don’t even know what you just did.’ He said, ‘You just made my week because you’re the first young African-American, you know you’re the youngest one in the game right now with a kid, you have a chance to have every male your age and younger who has kids now… you can make them step up and become better men.'”

“So when he told me that, I was like, ‘Wow.’ I didn’t even think about that and I never had my father in my life… ever! So this just makes me want to step up and just go harder even more and give her everything my father never gave.”

On the subject of those suicidal thoughts mentioned in the letter to fans, Bow Wow says, “The suicide thoughts just really came because I think earlier I was exposed to so much Uncle Russ to the point to where I kinda felt like it ruined my adulthood. When I was younger I wish I listened to everybody that was older telling me, ‘Don’t do that just yet, you should wait,’ or ‘Don’t go to the club yet, you should really wait until you’re 21 or you got nothing to look forward to.'”

The 24-year-old continues, “So that’s what happened, for me being around Jermaine and everybody so young I was around everything. So by the time I got 18, I was really 26 [laughs] and I didn’t wanna go to the club no more. When I got 20, I was like, ‘Okay, now I’m ready to get married.’ Now I feel like I’m 40! So the older I got, I just noticed my friends… I was like, ‘I can’t really hang with y’all,’ because they’d go to the club and I’ve done all that when I was 14.”

The arrival of daughter Shai changed all that for Bow Wow. He says, “Now that I have my daughter, I don’t even have those thoughts no more. Because now it’s like I got something to live for, I got more movies to go get, more records to go make because I gotta go hard for her now… It’s just a whole new outlook on life! It’s dope!”