Nickelodeon’s hit animated show, SpongeBob SquarePants, will hit Twitter with a vengeance for the first-time debut of The Ice Race Cometh: A Twitter Tale. This original story was created exclusively for the social networking site and will debut from July 12-15th. The story will be told in a special way, in order to keep interest peaking until the climax of the tale, as a Nickelodeon special. 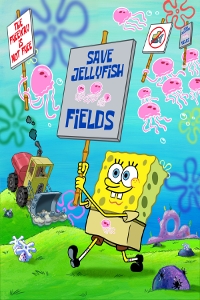 Move over Charlie Sheen! It’s the Twitter takeover everyone will be talking about! The hit Nickelodeon children’s animated series, SpongeBob SquarePants, will take over the Twitter-verse from July 12-15 as the show breaks new ground with an exclusive made-for-Twitter adventure.

The Ice Race Cometh: A Twitter Tale was conceived and developed for Twitter by the SpongeBob SquarePants writing team and will run from Tuesday, July 12 to Friday, July 15th.

The story will be told via multiple tweets and images throughout each day to set scenes and advance the action involving SpongeBob and his friends, as they prepare for the Bikini Bottom Great Sleigh Race. The Ice Race Cometh is a prequel to Frozen Face Off, the brand new primetime SpongeBob episode premiering on Friday, July 15th at 8 p.m. ET/PT.

Said Roland Poindexter, senior vice president of Nickelodeon animation, “SpongeBob’s fan base is so broad that about a third of its audience is adults, so we wanted to extend the show’s magic to new places like Twitter so those fans can experience it. SpongeBob is already a big deal in the social media space, with 25 million Facebook fans, and we hope his Twitter debut will drum up some extra excitement for all the people who love him and the show.”

By the way, SpongeBob’s 25 million Facebook followers have him way ahead of the Beatles and President Obama.

In the primetime special, Frozen Face Off, Bikini Bottom is buzzing with excitement as the town prepares for a sleigh race sponsored by an anonymous donor. But the gang’s dreams of winning the $1 million prize come to a halt when they discover Plankton’s scheme to steal the Krabby Patty formula during the race. SpongeBob and his friends must work together to navigate through the icy tundra and past a menacing snow mollusk before Plankton gets his hands on Mr. Krabs’ secret formula.

Since its launch in July 1999, SpongeBob has emerged as a pop culture phenomenon. The series has been the number one animated program with kids ages two to 11 for more than 10 consecutive years and over the past several years, has averaged more than 100 million total viewers every quarter across all Nickelodeon networks. It is syndicated in 171 markets in 36 languages and is the most widely distributed property in MTV networks’ history.