Selena Gomez’s new album, When the Sun Goes Down, sells 78,000 in its first week — a best for the singer and actress. 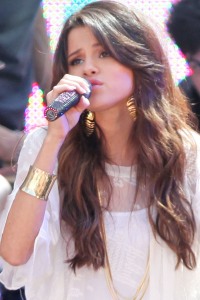 Selena Gomez has been one busy gal as of late, be it romancing boyfriend Biebs, a trip to the hospital or releasing the big ticket movie Monte Carlo.

Now, add a hit record to her scrapbook for the summer of 2011. Selena Gomez and the Scene’s When the Sun Goes Down debuted at number four on Billboard’s Hot 200 albums chart with 78,000 copies sold this week.

The tally is a first-week best for Gomez as it tops the 66,000 units sold for last September’s A Year Without Rain. The new album’s sales have seemingly been boosted by the self-affirming lead single, Who Says, which has been certified platinum.

“Thank you all for all the love and support of my new album,” Gomez tweeted over the weekend. “I am so glad you are all enjoying it so much.”

The Wizards of Waverly Place star is indeed everywhere — her summer collection of “Dream Out Loud” clothing is available now at K-Mart and Selena and the Scene kicks off a national tour of major amphitheaters July 28 in Boca Raton, Florida.

We don’t see the sun going down on Selena’s career anytime soon.